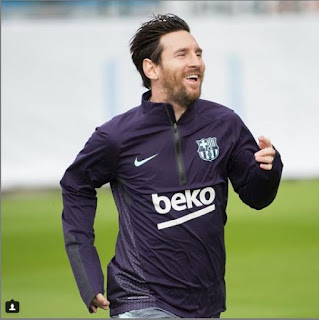 Barcelona superstar, Lionel Messi could return from injury earlier than expected for the club.

The Argentine was expected to be out for three weeks after breaking his arm against Sevilla on 20 October.

But after missing only the Champions League win over Inter Milan and Sunday’s El Clasico triumph, Messi took part in light training on Wednesday.

The 31-year-old forward is not in the squad to face Cultural Leonesa in the Copa del Rey on Wednesday night but may face Rayo Vallecano on Saturday.

Spread the love Nigeria thrashed Sao Tome and Principe 10-0 in a 2023 Africa Cup of Nations qualifier on Monday, ...

Spread the love Folarin Falana, a Nigerian rapper, songwriter, and actor better known by his stage name Falz, rose to ...

Spread the love Brazilian midfielder Willian has confirmed he would leave Chelsea after seven “wonderful” years at Stamford Bridge. The ...

Spread the love Liverpool manager, Jurgen Klopp, has been named LMA Manager of the Year, after leading the club to ...

Spread the love    Chelsea’s transfer ban has been lifted and now newly-appointed boss Frank Lampard has his eye on ...