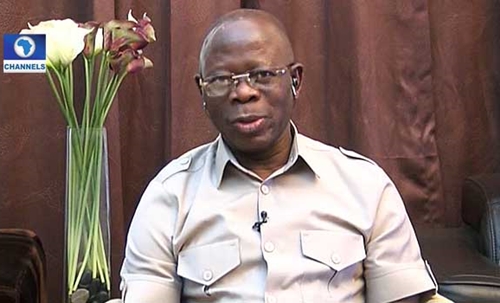 According to TheNation, Oshiomhole disclosed that refusal to pay a living wage amounted to creating a poverty cycle and a chain of Nigerians who cannot afford goods and services, adding that it was only by paying living wages and improving the purchasing powers of the worker, that production could be encouraged and employment opportunity created.

The former governor of Edo state spoke at a reception for Nigeria Labour Congress (NLC) President, Ayuba Wabba on his election as President of the International Trade Union Confederation (ITUC).

Speaking further, Oshiomhole said that if governors can be made to receive the same salaries irrespective of their revenue base, there was no reason why wages of workers should not be the same across the country.

He said “I am sure you must have read some of my comments on the minimum wage. I have told people that even I was to become the Secretary General of the United Nations I am a creation of Labour and I will never, publicly or privately do anything that will undermine or do anything that is designed to possibly affect the welfare of Nigeria workers.

“I am a believer that Nigeria needs to have a National minimum wage. I do not belong to those who say, because we are in a Federation, we should have different wages. I join in amplifying that we cannot apply the principles of federalism separately.

“If we have the National Salaries and Wages Commission that makes it possible for me as governor of Edo State presiding over about 4.3 million population to earn the same salary as the governor of Kano and Lagos state who are presiding over 15 million people, that argument cannot change when it comes to fixing a national minimum wage.

“I believe that we have to work together not only to get wages fixed, but to ensure also that they are paid. When the President makes public statements like the ones he has made, he has challenged you to take advantage and make sure that when he provides those resources as he has done almost four times, you ensure that they are used for the purpose for which he provided the money. If you don’t, I don’t think you have some one else to blame.

“To change this country, it cannot be done with placards. Placards can generate the heat, win temporary concession, but it will not fundamentally alter the direction of state. You have to be in it an do it from within.”

He went on: “Minimum wage is not about party, but about Nigeria. To be honest, don’t ask partisan question, but one that has to do with governance in Nigeria because this is an issue that all governors, regardless of party platform are united on. So, it is incorrect to put it as an issue that affects particular sets of governors.

“When I was a member of the governors forum, I did publicly advise my colleagues then that when it comes to the issue of minimum wage, I am not with them. Not only secretly, but publicly too, I am going to dissociate myself.

“If Nigeria was to wake up tomorrow and there is no one liter of oil and you must employ a worker, you are oblige to pay. Wages is a consequence of work. He who must employ, must pay and even the Bible says a laborer is entitled to his wages. I believe this view and I have canvassed them. I had an extensive interview on this and I spoke extensively on it.

“If you are hiring Julius Berger to construct a road for you! You don’t ask them to charge you according to the income accruing to your state. What it cost you to buy a bag of cement in Zamfara is the same price in Benin. So, if contractors are not charging you according to your level of income, and they are providing service while we run a market economy, the price of Labour cannot be static if other prices are changing.

“Otherwise, workers face double squeezes of rising prices and stagnant wages. This creates a vicious cycle. When you lack purchasing power in an economy, how do you stimulate the economy to bring goods and services and create jobs? So, you create a vicious cycle of people who are too poor to buy anything and so, those who produce cannot sell and because they can’t sell, they are closing shops and more people are being thrown out of work. We should be more bold and courageous .

“Those who are more inward looking in their consumption pattern are the working people because they are the ones that buy garri, yam, tomatoes and eat local food. They are not going to import any food or buy Toyota jeeps. They are the ones who go to the local park to patronise local taxis driven by Nigerians.

“So, their pattern of spending is such that their money circulates. So, when you deny him wages, you trigger a vicious cycle of poverty. So, I am clear about it. Whether I am Chairman of the ruling party or not, my views are not corrupted by the seeming privilege position that I occupy.

“What is constant in my life is my life is my background which is Labour. I don’t deny it, I don’t hide it and I have always been clear that NLC, Working with TUC have a right to demand a reasonable,e living wage and when I was governor, I made the point and increased the minimum wage to N25,000 three years ago. I paid it till I left office and my successor is paying it.”

He said further: “Sometimes, when I meet people and they ask me, now that you are on the other side and I tell them that I am and will always be in one side and that is the side of the working people. I feel proud to say that I am the chairman of the governing party because the President is as committed to the welfare of the ordinary worker like any trade union leader.

“He is the only president to my recollection since 1999 that can publicly lament, question and interrogate the hearts of people in government and ask them how do you sleep when you have not paid your workers for six months.

“He goes beyond lamentation and says, ‘take this bailout and make sure they are paid, take this money that was over deducted by my predecessor and pay those who are dying for non payment of wages and pensions’.

“I can’t be Chairman of the other party if they were to be in government. I am privileged to be Chairman of a party that cares for the welfare of the ordinary Nigerian whether in the organised private sector or the forgotten majority in our rural settings.”

Turning to Nigerian workers, the former NLC President said: “It is nice to celebrate, but you also have new challenges that you are going to confront around the world. I don’t know what is going on now, but I know that we still have countries where union leaders are murdered for daring to belong to trade unions and question the practices of private sector employers.

“Out of millions of Nigerian workers, you decided to elect Comrade Wabba and as you can see, what you picked among yourself has been recognised around the world as a material that capable of presiding over the affairs of the workers of the world.

“So, I also congratulate you for achieving this. But this must force us to do serious reflections. If we are going to preside over the workers of the world, what do we do to,deal with the distractions at home when we still have some of our brothers and comrades who still think that at this time, we can make sense out of a divided Labour movement.

“There is only one Organised Labour and I am happy that President Muhammadu Buhari, speaking through the lips of the Vice President, has reassured Nigeria Labour Movement that his government will not provide a platform for anyone to factionalise Organised Labour.

“You are not under the kind of threat that we faced when I was President of NLC when the former President sent a law to the National Assembly. Not only to deregister the NLC, but also to make it possible for any three or four unions to form a Labour Centre.

“The President believes that we need more national institutions and that organised Labour is a potent unity bridge that must be sustained. So, you have that comfort. People can try anything, but under this government, there will be no registration of another Labour Centre. We need to be fired by the spirit of our people to work together and deal with all the issues that are bedeviling our country.”