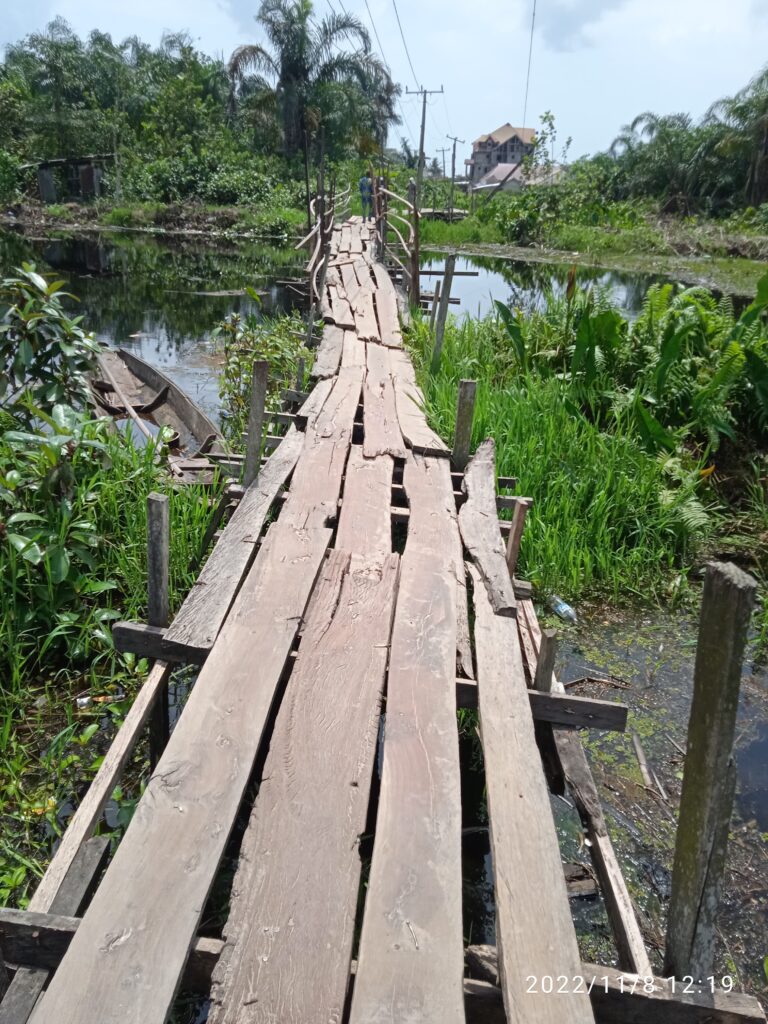 Residents of Okeogbe community in Olorunda LCDA, an Egun speaking community located on the outskirts of Lagos along Badagry expressway yesterday expressed concern over the inability of the government to construct the only bridge project which connects the community to several others nine years after the contract was awarded.

When ipledge2nigeria Lagos correspondent visited the community, findings had it that after the government awarded the contract for the construction of a two-kilometre bridge in 2013, the contractors brought materials and their equipment to site and began the project but abandoned it before they started, leaving large concrete slabs on its trails.

Narrating the agony that the inhabitants of the area have been passing through for years because of the abandoned bridge project, a landlord, Gbenga Olorunlogbo said Our community has been cut off from other communities, so  many people have lost their lives while walking on the wooden bridge that was done by residents in the community.”

“As part of self-help, to bring succour to the plights of residents we had to construct the wooden bridge. It was constructed years ago by residents. Everyone passing through the bridge has to pay N 50 which is used to maintain the bridge. Unfortunately during the rainy season, the bridge is submerged by water and residents have to walk inside the water to cross to the other side.”

Lamenting a trader Ogunsemore Sunday who sells building materials in the community said, “doing  business here is very frustrating as traders have to carry their wares, and goods trek on the pako bridge which is about two kilometres before they can cross to the other end.”

“Look at the community like a deserted village. Most people who have houses have sold their houses and moved from the community because of the lack of access roads and the state of this bridge. The whole situation has hindered the growth of business in the community.”

The Lagos State government should come to our aid, they should intervene and do something immediately to help alleviate our suffering.”

Similarly, the school principal of Rare Hyssops School Akinsanya James revealed that during the rainy season parents from other communities don’t allow their children to come to schools for fear of them drowning as the link bridge is flooded and can easily slip and fall into the waters.”

Some parents had to withdraw their children because of this abandoned bridge that the government has refused to start the bridge.”

For the sake of these little children, who keep falling and drowning in the water, the government should do something fast about the bridge. Children should not lose their lives trying to get an education.”