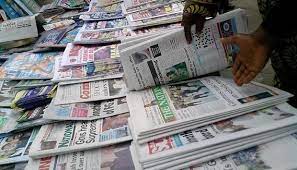 10 things you need to know this Monday morning

2. The Indigenous People of Biafra, IPOB, on Sunday, accused the Attorney General of the Federation, AGF, Abubakar Malami of making efforts to destroy the criminal justice system and judiciary in Nigeria. The group stated this while stressing that “filing dead charges” against Kanu was an affront against the court judgment ordering Kanu’s release.

3. The Federal Government will on Monday, November 14 resume the trial of the leader of the proscribed Indigenous People of Biafra (IPOB) Nnamdi Kanu on terrorism charges brought against him. The trial will centre only on seven out of 15 count charges sustained against Kanu by Justice Binta Nyako of the Federal High Court in Abuja.

4. Former Nigerian President, Olusegun Obasanjo, on Sunday, blamed lack of education in managing diabetes for the reason many patients die untimely. Obasanjo spoke at the MKO Abiola Stadium, Abeokuta, the Ogun State capital, during a novelty match between All-Stars FC, Abeokuta and the ex-Super Eagles.

5. About eight local airlines and their associations have dragged the federal government and its foreign technical partner and majority shareholders to court over the national carrier project. The airlines listed Nigerian Air, Ethiopian Airlines, Minister of Aviation, Hadi Sirika, and Attorney-General of the Federation, Abubakar Malami, as defendants.

6. The Department of State Services had continued to keep mum on the reported suicide of one of its official, Adetutu Adedokun, who jumped into the Lagoon on Thursday. The Uber driver whose vehicle Adedokun was in, reportedly claimed she was having a conversation with her fiancé on the phone before alighting from the car and jumping into the lagoon.

7. A resident of Ibafo in the Obafemi-Owode Local Government Area of Ogun State, Mrs Rosemary Obidinma, who was reported missing, is dead. The mother of five did not return from her shop at Apapa, Lagos, on November 2. Her body was discovered on Sunday allegedly killed by ‘one-chance’ criminal elements.

8. Adewole Adebayo, Presidential candidate of the Social Democratic Party (SDP), has said that if the police system in Nigeria was effective, half of those in government would be in jail. He stated this during the second series of presidential town-hall meeting organised by ARISE TV in collaboration with Centre for Democracy and Development (CDD).

9. Bureau de change operators in Adamawa State are rejecting foreign currencies from customers due to growing uncertainty in the parallel market. Some of the money changers interviewed at Jimeta Modern Market in Yola said they were apprehensive over the sudden and continued crash of the dollar which destabilized the parallel market.

10. The Kaduna State Government said troops of the Nigerian Army, yesterday, repelled terrorists attack, killed two and cleared their camps in Chikun Local Government Area (LGA) of the state. The Commissioner for Internal Security and Home Affairs, Mr Samuel Aruwan, confirmed the development in a statement issued yesterday, in Kaduna.