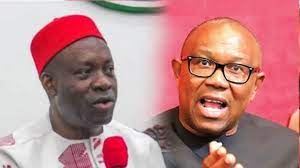 The apex Igbo socio-political organization, Ohanaeze Ndigbo, has listed punishments that would be meted out to the Anambra State Governor, Chukwuma Soludo, over his recent attack on the Labour Party, LP, presidential candidate, Peter Obi.

Speaking with DAILY POST, Isiguzoro said the body would back any move by the Anambra State House of Assembly to remove Soludo from office in the nearest future.

Isiguzoro warned that the former Governor of the Central Bank of Nigeria, CBN, would face great challenges because the people of the state would rise up against him.

According to the Ohanaeze scribe, the Southeast would see Soludo as the enemy who worked against their 2023 presidential chances.

He said: “For Soludo to have come out to insult the candidate of Nigeria, he might not return to the office because Ndigbo would punish him by making him a one-term governor. Soludo may face a great political challenge in Anambra State because the masses will rise against him.

“There must be political repercussions and one of which is that the Ndigbo would task the Anambra State House of Assembly to do the needful.

“Ndigbo will look away to remove all those bad eggs who have mortgage our political interest, those who have portrayed us in bad light that we are not united.

“For him to have shown and demonstrated that he was been enrolled to come and thwart being the Governor of two presidential candidates, APGA and Labour Party in 2023, and is the best person to be hired as an undertaker to bury Peter Obi’s presidency, this has begun the end of his political sojourn as the Governor of Anambra State.

“In the nearest future, the Igbos will encourage anything that would make the Anambra House of Assembly remove Soludo out of the way.

“Ndigbo will rise up in any gathering to challenge the views of Soludo to the great Igbo nation. Soludo’s activities in the last few days have been an affront and slap on the Igbo nation, and Ndigbo would return such with a very big sanction, and the political sojourn of Soludo as the Governor of Anambra State is over.”

Soludo anchored his claim on the series of attacks on him for downplaying the investment claims by Obi during his tenure as governor.