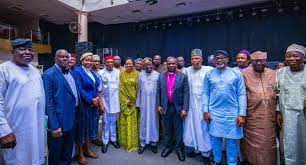 List of Demands CAN Leaders Present to Tinubu during Abuja Meeting

Ahead of the 2023 presidential election, the presidential candidate of the All Progressives Congress (APC), Asiwaju Bola Ahmed Tinubu,met with the leadership of the Christian Association of Nigeria (CAN) in Abuja.

CAN had initially stood against Tinubu for fielding a Muslim-Muslim ticket after choosing Kashim Shettima, a former governor of Borno state, as his running mate.

However, during his meeting with the leadership of CAN under the new president Daniel Ukoh, Tinubu explained why he picked Shettima and assured the Christian leaders that he won’t run his administration on the religious bias if elected in 2023.

After listening to the APC presidential candidate, the CAN leaders presented a charter of demands and issues to him, according to the statement sent to Webteam@ipledege2nigeria on Wednesday, November 13, by Tinubu’s media aide, Tunde Rahman.

They demanded among others

2 Devolution of power to states

3 Equal rights for all religions and their adherents

4 Right to self-determination by all ethnic groups

5 Right to control natural resources by communities that bear them

6 No to open grazing

7 Equitable electoral system that guarantees the right to vote and be voted for by all.

Earlier, Ipledge2nigeria reported that the leadership of the Christian Association of Nigeria (CAN) in Lagos allegedly declared full support for Tinubu.

This was reportedly made known on Sunday, October 16, by the chairman of CAN in Lagos, Reverend Stephen Adegbite. Adegbite was said to have affirmed that God will punish the religious group in Lagos if it fails to support Tinubu come 2023.

In another previous report, a former Secretary to the Government of the Federation (SGF) Babachir David Lawal made a sensitive allegation about the ruling APC’s same-faith ticket.

In the buildup of the 2023 general elections, Lawal alleged that in his desperate bid to convince the electorate to accept the same faith ticket, Tinubu procured fake Christian groups to divide the church.

The ex-SGF made the allegation in a press release made available to journalists disclosing that a number of Nigerians have reached out to him and former Speaker Yakubu Dogara to convince them to accept the same-faith presidential and vice presidential ticket of the APC which the duo has vehemently opposed and negotiate with the party.