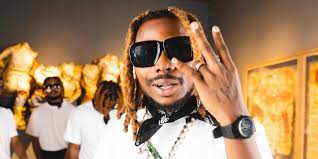 Buzzing Nigerian singer Ahmed Ololade, popularly known as Asake, is now trending after the ticket prices for his Lagos concert was released.

The talented singer, who has been the among the biggest thing in the industry since 2022 started, and still maintaining his stance as one of the hottest revelations the Nigerian music scene has ever seen, will be rounding up a superb year with a headline concert in Lagos, which is scheduled to hold this year.

According to online photos, the tables will sell for between 3 million and 10 million naira. There are no regular tickets available; only VIP replacement tickets (where bearers will stand) are available for a whopping seventy thousand naira.

The reported ticket fees have sparked a lot of reactions from a sizeable number of fans, with some protesting against the “expensive” fees attached to seeing the neo-fuji act perform in his homeland.

At the moment, while the circulating tickets flier appears well-detailed, Flytime, the show promoter is yet to release the official ticket fees.