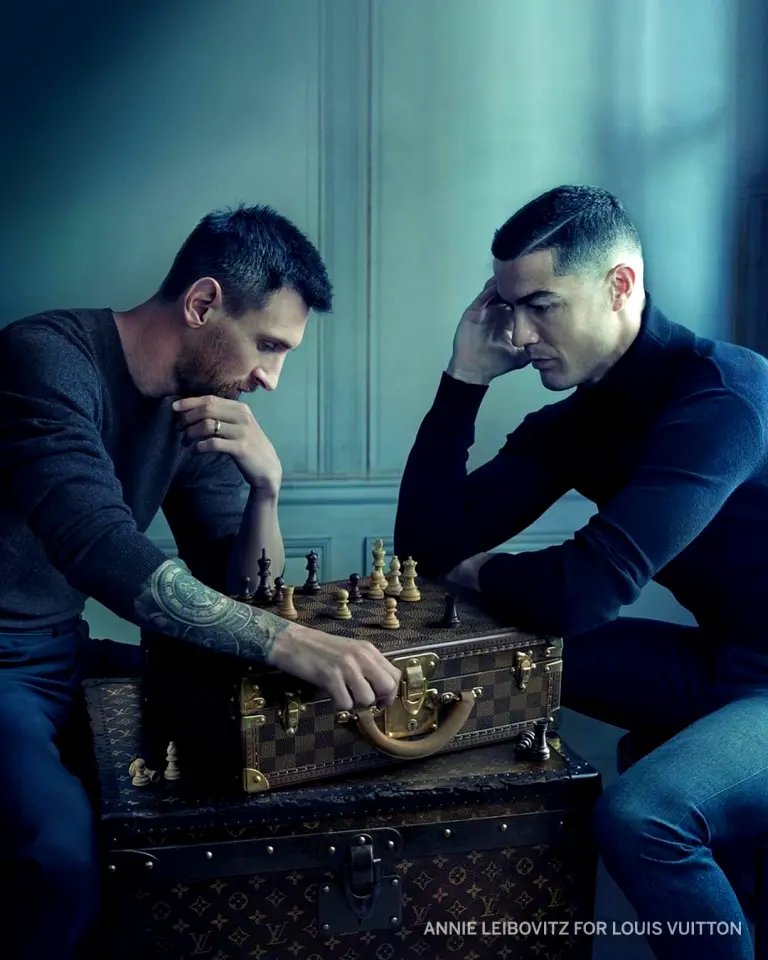 World football stars Lionel Messi and Cristiano Ronaldo played off the football pitch in a photo of Louis Vuitton campaign, which has now gone viral.

Ronaldo and Messi took the internet by storm with a photo on featuring Saturday, featuring both iconic players in an advert for the French luxury fashion house and company Louis Vuitton.

Louis Vuitton seems to have done the impossible by getting the two football icons together to play nicely off the pitch, with a nice and quiet classic board game.

The photo of the fashion house campaign showed the two stars playing chess on top of a Louis Vuitton suitcase, using the signature squares as spaces for their pieces.

The photo has gained over 50 million likes combined on their official Instagram accounts sparking the conversation as to who is the greatest football player in this era.

In a message accompanying the photo on its verified Instagram page, Louis Vuitton stated, “Victory is a State of Mind. A long tradition of crafting trunks photographed by @annieleibovitz for @louisvuitton.

“In addition to a long tradition of crafting trunks for the world’s most coveted sporting trophies, the Maison celebrates two of the most talented football players today,” it added.

Recall that Ronaldo and Messi have endured decades of rivalry in the global football scene. The Argentine finished second to Ronaldo at the 2008 Ballon d’Or award.

The following year, the two star footballers met in the Champions League final between Manchester United and Barcelona in Rome.

After Messi’s triumph, Ronaldo moved to Barcelona’s arch-rivals Real Madrid and they renewed their rivalry with key attraction to football games and keenly-contested of El-Clasico games.

Louis Vuitton’s decision to bring Ronaldo and Messi together for an advert is creative, a strategy that has sparked curiosity and debate as to why the football stars where paired in a game of chess.

Meanwhile, the chess position adopted in the photo of Ronaldo and Messi, according to multiple sources, was derived from Magnus Carlsen and Hikaru Nakamura’s draw in 2017.

Ever since the battle in Rome between Manchester United and Barcelona, Ronaldo and Messi are yet to meet in the final of the Champions League or World Cup.

According to several predictions, should Portugal and Argentina top their respective group, they will have a chance to meet on the biggest football stage.

Ronaldo, and Messi opted to post a picture collaborating with Louis Vuitton a day before the start of the much-anticipated Qatar 2022 World Cup tournament.

The Louis Vuitton bag which holds the chess pieces is a replica of that used to present the World Cup trophy at the 2018 edition in Russia.

The Louis Vuitton bag was used to present the World Cup trophy at the 2018 edition in Russia.

It is now being suggested the bag is a metaphor for holding the trophy while the chess board shows Ronaldo and Messi making moves for their teams to advance to the final.

Messi will lead the Argentine team against Saudi Arabia in their opening group game scheduled for Tuesday, November 22, After a 5-0 victory against the United Arab Emirates.

This comes just as Ronaldo and Portugal recorded a comfortable 4-0 win against the Super Eagles of Nigeria and will begin their campaign against Ghana on Thursday, November 24, 2022.