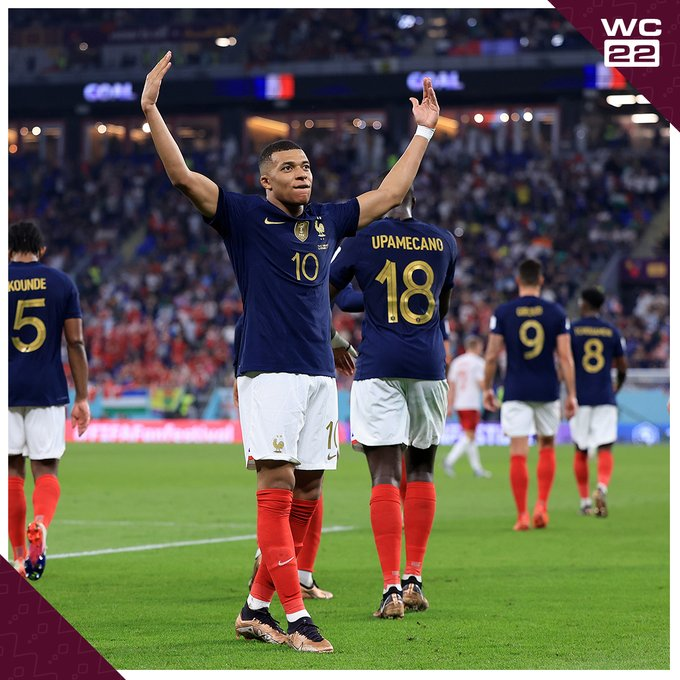 A double from Kylian Mbappe earned France a 2-1 win against Denmark in Group D and a place into the round of 16 at the Qatar 2022 World Cup on Saturday.

The Paris Saint-Germain star has now bagged his third of the World Cup, ties with Ecuador striker Enner Valencia

It is France’s second win of the tournament after they opened their campaign with a comfortable 4-1 win against Australia.

For Denmark, who played a goalless draw with Tunisia in their group opener, must now beat Australia to join France in the knockout stage.

France almost opened scoring on 10 minutes after Adrien Rabiot headed a cross down into Olivier Giroud, but the striker could not make proper contact with it.

In the 16th minute Ousmane Dembele beat his marker and sent in a cross which Giroud headed wide under pressure.

It was Rabiot’s turn to go close on 21 minutes but his powerful header off Dembele’s cross was saved by Kasper Schmeichel.

The reigning champions continued to probe and on 33 minutes Antoine Griezmann played a neat one-two on the edge of the box with Giroud and then fired a shot at Schmeichel’s feet from a narrow angle.

With 10 minutes left in the first half Andreas Cornelius had a chance for Denmark only to fire wide.

France continued to dominate and almost scored on 54 minutes after Dembele tried to set up Mbappe but Schmeichel was quickest to the ball.

France eventually took the lead on 60 minutes thanks to Mbappe who turned in Theo Hernandez’s cut back.

But surprisingly the Danes, who had been second best all through the encounter, drew level through former Chelsea star Andreas Christensen.

A flick from Andersen found Christensen who headed home to register Denmark’s first goal of the tournament on 68 minutes.

The goal seems to ignite Denmark and they almost took the lead on 73 minutes but Hugo Lloris had to save the French blushes to deny Jesper Lindstrom.

90+1 min: There will be six minutes of added time, as Denmark are now throwing players forward. They’re making one more change, as Christensen comes off in favor of an Alexander Bah.

The broadcast shows the semi-automated offside technology output on the Mbappe winner, which confirms he was onside, by a HAIR, basically level with the Danish defender on the delivery from Griezmann.

86th min: GOAL! FRANCE! Has Mbappe won it for France? It’s that connection again, as the cross from Griezmann meets the head of Mbappe right on the doorstep, and Schmeichel can’t do anything about it. The crowd in Qatar explodes and Les Bleus may have snatched all three points.