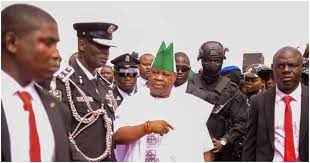 In a statement issued by his media aide, Olawale Rasheed, copy of which was made made to newsmen hours after his inauguration approved the appointment of Alh Kazeem Akinleye as chief of staff (COS), and Alh Teslim Igbalaye as secretary to the state Government (SSG) .