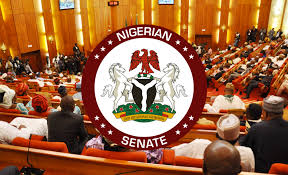 The Nigerian Senate has called on the Central Bank of Nigeria (CBN) to suspend the ATM card maintenance charges being deducted from customers in a resolution passed during plenary on Wednesday, October 17, 2018.

The upper legislative chamber of the National Assembly also directed commercial banks operating in the country to configure their machines to dispense up to N40,000 per withdrawal pending the outcome of investigations by the Senate committees tasked with probing the excessive and illicit bank charges.
President of the Senate, Bukola Saraki, said the motion affects every Nigerian and should be addressed by the relevant authorities. He said the Senate must ensure that effective resolutions are reached to ease the financial burden of excessive bank charges on everyday Nigerians.
He said, “This is a motion that affects the lives of every Nigerian  –  irrespective of what part of the country you come from or whatever political affiliation you might have. This is why we are here: to always defend and protect the interests of the Nigerian people. “This Senate has done this many times before; when there was a hike in the mobile telecommunication data charges, we intervened and put an end to that. When there were discrepancies and increases in electricity prices, we also took action. We have done this on a number of similar cases. Therefore, on this, I want us to take effective resolutions.”
Speaking further on ATM withdrawal limits, Saraki said it’s time for the banking sector to get rid of unnecessary charges that affect customers. “For me, this is a major step that we are taking. This is because I introduced the first ATM machine that came into Nigeria over 25-years ago. Now, after 25-years, we should have grown out of these excessive charges and moved on.
“So, I believe that this something that we must address to create an environment that protects all Nigerians, because these kind of charges in this economy affects everyone,” he said. While contributing on the issue, other lawmakers lamented about the charges and questioned why Nigerians are burdened with them. Senator Emmanuel Bwacha (Taraba South – PDP) said, “The common man is also a victim. Banks declare profits and you wonder where these profits are coming from  –  it’s from the sweat of the common man. Let us come up with a law that puts banks on their toes.”
Senator Kabiru Gaya (Kano South – APC) said the banking sector needs to be questioned on some of its practices that are negatively affecting Nigerians. “The Senate must take a serious stand on this issue. Nigerians are really suffering. The banking system is not encouraging. I had an issue, took it to the bank and was refunded but how many Nigerians can do this? The issue needs to be addressed,” he said.
Senator Bala Ibn Na’Allah (Kebbi South – APC) also said, “It won’t be out of place to institute a committee that will call on the CBN to tell us what these charges are about. The Senate by fiat should abolish charges if they can’t be verified.”
The upper legislative chamber further directed its Committees on Banking, Insurance & other Financial Institutions and Finance to conduct an investigation into the propriety of ATM card maintenance charges in comparison with international best practices and report back to the Senate.
The committees were also directed to invite the Governor of the CBN, Godwin Emefiele, to appear before the Senate to explain why the official charges as approved by the CBN are skewed in favour of the banking institutions as against the ordinary customers of the banks.
The Senate also called on the Consumer Protection Council to look into the various complaints of excess and unnecessary charges by Nigerian banks. The motion on the illicit and excessive bank charges on customers’ accounts was sponsored by Senator Gbenga Ashafa (Lagos East, APC).
defend our unity, News, news, news homepage, politics, politics