Buhari Should Close The Border To Prevent Obasanjo From Escaping – Oba Of Lagos, Rilwan Akiolu 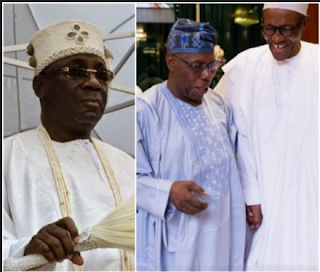 The Oba of Lagos, Rilwan Akiolu says Bola Tinubu, national leader of the All Progressives Congress (APC), will be justified if he is angry over the affairs of the state.

Tinubu had rejected the reelection bid of Akinwunmi Ambode, governor of Lagos state, throwing his weight behind Jide Sanwo-Olu who eventually emerged the APC governorship candidate.

In an interview with PUNCH, Akiolu said he has asked Ambode to leave it (the primary election) to God.

He said no evil will befall Ambode.

“No evil will befall him and God still has great plans for him (Ambode). When the breeze blows, we will all see what the chicken is hiding underneath.

“The truth is that if Bola Ahmed Tinubu is angry, he’s justified. No evil will befall the three of them. They know my stance on the issue and it’s not a secret.

“Better people should come into politics, because majority of them there are liars and that is the truth. As time goes on, we will continue to de-emphasise the import of money in our election.

“On the other hand, concerning Ambode, if you have charm but you don’t have the antidote or another charm that can counter it, then you don’t have anything. I won’t say more than that. May God help all of us.

“So, I didn’t talk because they are both my children and it will get better.”

‘BUHARI SHOULD CLOSE THE BORDER TO PREVENT OBASANJO FROM ESCAPING’

“The moment he wins the election, he should close the border so that Obasanjo won’t escape,”the Oba said.

“Obasanjo should change his ways. An adage says that a deity that we try every possible thing to put in a place of honour that defies all such gestures would expose itself to ridicule at the end of the day.”