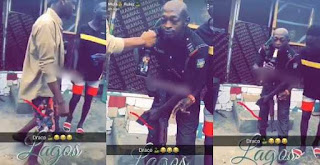 After a video emerged yesterday showing a Lagos policeman getting drunk on duty at Akowonjo, Dopemu, the police has reacted.

Reacting to the video, Dolapo Badmos, the Zone 2 PPRO said the police officer has been identified and arrested by the Commissioner Of Police, Lagos state Command as directed by the Inspector General Of Police.

She added that, “He is currently facing a disciplinary panel set up to investigate and try his conduct, the outcome will be made public in no distant time”.