Why My Marriage To Olu Jacobs Has Lasted – Joke Silva 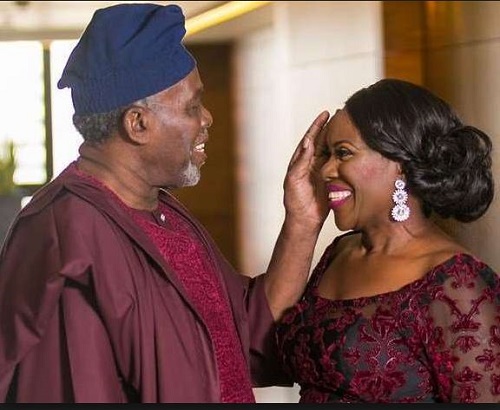 It is not unusual for celebrity marriages to crash. In fact, these days, it’s almost expected. But despite the downfall of many, a few Nollywood relationships have stood the test of time.

The union of veteran actors, Olu Jacobs and Joke Silva, is a shining example in this regard. Having recently celebrated their 33rd wedding anniversary, the couple have earned the bragging rights. PREMIUM TIMES recently caught up with Joke on the set of a new Nollywood movie, ‘Two Weeks in Lagos’ where she spoke about what has sustained her marriage thus far.

Congratulations on your 33rd wedding anniversary. How would you describe the journey so far?

Joke: The journey has been incredible and extremely interesting. It has also been one of learning. I don’t think anybody can ever prepare anyone for marriage. I had friends who were married until one partner died or death did them part and well over 40 years we’re each other’s friends. They had their challenges and they weathered the storm. Those were my role models. Knowing full well that there will be storm, I soon realised that my storms were totally different from their own storms. I wasn’t prepared for my own storms.

What are some of the lessons learnt in your marriage?

Joke: When my own storms too came, it was also a learning curve for both sides (my husband and I), we both had to learn to forgive each other. I learnt that marriage is not a destination; it’s a continuous journey, and somehow, it seems like the enemy knows that, so he says, “So, you weathered this storm, let me throw another one, let me see whether you will weather this one.”

But, I think when you know the person you are married to, when you like the person you are in relationship with, when you do have respect for each other, you learn. At least for me, for my husband, he was always wanting what was best for me. I had to also learn what was best for him but I finally got. It differs from person to person and it all depends on what your background is.

Was there a point in your marriage when just wanted to end it and not minding what the society would say?

Joke: It happened a lot. I recall a particular incident that happened when we just had our first a baby. It turned out to be a learning curve for me. Olu had just come back from set apparently what happened was that he was still in that character that he had just played on set. So we were just talking and he just started shouting and I was like, “Is it me you are talking to? Do you think I don’t have a father?” So I packed my clothes with the drawer and I dumped it in my car, carried my baby and I remember our landlady lived at the back of our compound. So, she came out and started shouting, “Joke, where are you going to?’’ I told her I was going to my father’s house. When I got home the first person I see is my mum and she said what are you doing here? I began ranting and she said you don’t have a house or a room here, you better pack your bags and go home. My father sort of understood where I was coming from. Funnily, my husband called and asked, “When are you coming home?” That was the first time and I did it a couple of other times.

Do you think divorce is really an option?

Joke: I think that if you are in a situation that you cannot tolerate bearing in mind that we all of us have different thresholds of pain be it emotional or otherwise. Please if you have reached your threshold, life is not hard, please carry your load and go. Because if you leave they will talk and if you stay they will still talk. There are some people who needed to leave because they wanted to maintain their sanity, if they didn’t leave they will go mad. There is life after a divorce.