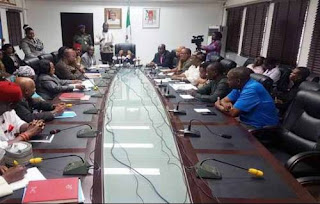 All hope was however dashed when ASUU led by its national President, Biodun Ogunyemi, staged a walk out from the meeting presided over by the Minister of Labour and Employment, Sent. Chris Ngige, even as the Minister of Education, Mallam Adamu Adamu was absent at the meeting.

Although the ASUU President declined comments on the reason why they were walking out of a meeting that lasted two hours, the ASUU delegation had arrived at the ministry at exactly 5:00 p.m. but no member of the federal government delegation was around as at this time, arriving at 6:00pm led by Ngige.

At the start of the meeting before the walkout, Ngige had told the lecturers that he hopes a consensus on most of the issues was reached at the end of the meeting. He assured the union that attention would be paid to three critical demands, which were salary shortfall, university revitalisation and earned allowances of lecturers

After ASUU’s walkout, the minister of Labour and employment maintained that negotiations were still ongoing and that the Federal government would try and meet up with ASUU’s demands before Christmas so as to allow affected University students resume school in January

The university lecturers embarked on an indefinite strike on November 4, demanding improved funding of universities and implementation of previous agreements with the government.

Meanwhile, an earlier meeting between the striking Academic Staff Union of Polytechnics (ASUP) and the federal government, ended in a deadlock

The meeting which lasted for five hours on Monday, was chaired by the permanent secretary of the ministry of education, Sonny Echonu

According to the ASUP President Usman Dutse, Polytechnic lecturers were not pleased with the body language of government which seems to be proposing second week of January 2019 for the continuation of the meeting

ASUP had resumed strike on December 12, 2018 following what it described as governments failure to keep to agreements reached on ‘NEEDS’ assessment, earned academic allowance among others.