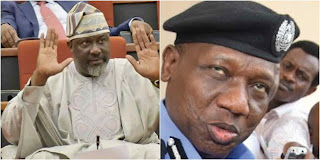 The police have deployed over 50 more officers in Senator Dino Melaye’s Abuja residence. this came as the Senate on Wednesday said it had taken legal steps against the police for laying siege to Melaye’s home since Friday.

The red chamber expressed confidence that its action would ensure freedom for the embattled senator, who is representing Kogi West Senatorial District at the National Assembly. One of our correspondents learnt that the police might enter the building forcefully to arrest the lawmaker said to be inside the house. One of our correspondents, who visited the scene, observed many policemen taking positions near the mansion.

The police said Melaye is wanted for the alleged shooting of one Sergeant Danjuma Saliu attached to 37 Police Mobile Force while on official duties along Aiyetoro Gbede- Mopa road in Kogi State.

The police on Saturday allegedly cut off power supply to Melaye’s home as part of the strategies to make him uncomfortable so that he could surrender. Force spokesman, Jimoh Moshood, stated that Melaye had repeatedly shunned several invitations asking him to report for investigation into the case of attempted culpable homicide.

He said the police would not leave the lawmaker’s residence without arresting him.

The leader of the opposition in the Senate, Senator Biodun Olujimi, told one of our correspondents in Abuja that the leadership and members of the Senate would not abandon Melaye to his fate.
The minority leader alleged that the Inspector-General of Police, Ibrahim Idris, deliberately frustrated all efforts by the Senate to gain access to Melaye. Olujimi said, “We don’t want to be lawless that is why we are taking steps to see how we could handle the matter legally.

“The senator cannot run away, his passport has been seized by the police. Whatever it was that they want to arrest him for happened since July 2018. “If he didn’t run away between July and now, he can’t run away. I felt very disgusted when I got to his house this morning and I discovered that there were over 12 police vans and more than 22 policemen there, seeking the arrest of one man.

“I wonder why they should do that when they can easily ask me as the Senate Minority Leader to produce him on a particular day and at a particular place. It is only if I failed to do so that they can issue a warrant for his arrest.”