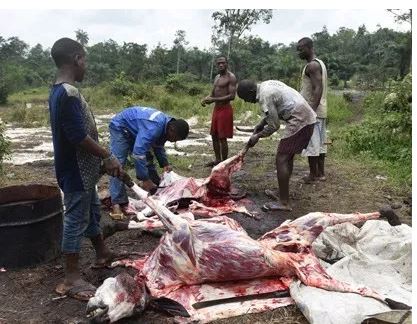 The Head, Quality Control, Nigeria Commodity Exchange, NCX, Dr. Khadijah Abdulaziz has disclosed that some meat sellers in parts of the country now spray dangerous and poisonous substances like sniper on meat before selling them thereby endangering the lives of unsuspecting meat consumers.

Dr. Abdulaziz made this known yesterday in Makurdi during a one-day training for women and youths from Makurdi and Guma local government areas of Benue state on commodity trading organised by NCX in collaboration with Sandstone Associates.

She lamented that the new practice was exposing Nigerians to live threatening ailments and diseases which often times lead to untimely death.

According to Dr. Abdulaziz, “the trend among meat sellers in many markets in the the country is that they mix dangerous chemicals like sniper in water and sprinkle it around and on the meat they intend to sell to consumers in order to chase away flies.

“We all know that snipers is dangerous to the health of anyone that consumes it but meat sellers use it directly on meat products. That is why these days, if you go to some markets to buy meat, you can hardly find flies because they now spray sniper on them.

“We also have the same challenge with the use of pesticides to preserve farm produced which is also causing unimaginable damage to the health of Nigerians.

“When fumigation is done and the produced is supposed to stay for a specific period before being pushed to the market, people do not stick to that prescription but release the product into the market.

“Some are consumed directly by us and also used as feeds for animals but either way, eventually we end up consuming the wrongly preserved food and animals that had earlier been poisoned from the improper application of preservatives exposing us to life-threatening contaminants.”

Abdulaziz said to address the challenge, the integrated approach to crop had become the best form of preserving and storing crops with the use of none poisonous organisms to preserves food crops.

Earlier, Assistant General Manager, Corporate Communications, NCX, Chris Echikwu said the training was intended to exposed participants to the benefits derivable from engaging with NCX and urged participants to take full advantage of the programme.