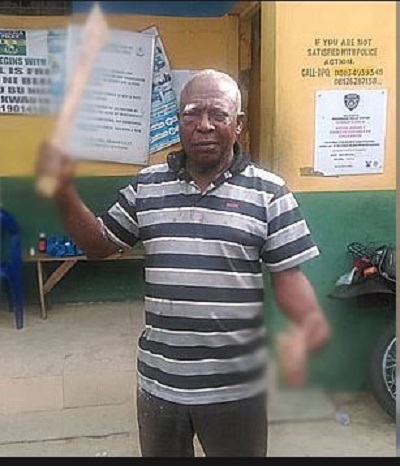 A 61- year- old fish pond owner, Jeremiah Obrifor, arrested by operatives of Lagos state Police Command for allegedly cutting the right hand of an 11-year- old boy, has given reasons for his action.

”It was not the boy’s hand that I targeted. It was the fishing hook that I targeted so that he would not succeed in taking the fish in his hook, but the devil which must have been sent by people from my village who envy me out of hatred and jealousy because I am a successful man made me to miss the target just to put me in this trouble.

‘’Let me give you a little background of my life before the devil struck. I used to buy baby fish, about 3000, buy fish food and nurse the fish for five to six months before harvesting them.

‘’Let me tell you why I cut the boy’s right hand. I was living outside my house and every week, I go there to inspect the pond at No. 14 Isha Ibrahim street, Mechanic bus stop, Mebanu, Okokomaiko, a suburb of Lagos.

‘’I am an electrician but in 1996 I felt that I could not do electrical work again due to age. As a result I decided to build a fish pond in my compound at the address I earlier told you. I reared cat fish, water snapper that have scales which used to nap water with tail. When I noticed that thieves used to come to steal my fish I decided to raise the fence to prevent thieves from having access to my pond but that measure or step did not stop them.

‘’In fact, the people in the neighbourhood had arrested these boys many times and I had always asked my neighbours to let them go. The only thing they used to do whenever they catch a thief stealing my fishes is to seize the stolen fish and later hand the stolen fish to my wife. However, the boys re-strategized and by digging holes through the wall of the fence through which they cart away my fish almost on a daily basis. All my three children are in the university. The first daughter is in 400 level. I was planning to go home and rest when all of them graduate but these thieves became a nuisance to my struggle.

‘’On the 1st of June this year I went to my house to see my pond as it rained heavily and I wanted to go and check the water level but as I entered my compound I saw fish flying up and being drawn through holes. I saw hooks drawing fishes. The thieves were about seven and they all ran away when I shouted , who are you?.

‘’The following day which was Sunday, I had a meeting with my kinsmen living in Lagos. The meeting was scheduled to be held in my house so I arranged chairs downstairs for the meeting.

‘’It was the same day I had arranged for a carpenter and a mason to come and cover those holes made by the suspected thieves. As I was waiting for the mason I said let me call the carpenter to prepare the platform which the mason would use when he arrives. As I was seated upstairs trying to call the carpenter on phone the thieves came again and I saw their hook ropes drawing away my fish.

‘’I did not know what to do, rather, I decided to go down and see what the thieves were doing well. As I came down, I took the machete I kept near the pond which I used to clear grass near the pond and went straight to where the hook rope was coming from one of the holes. I targeted the hook but, very, very unfortunately, the machete missed the rope and cut the boy’s right hand and the hand fell inside the pond. I became confused and afraid because the boy ran to the street behind my house shouting in pain which attracted one of his relations , passersby and neighbours who came in droves. The boy’s relation entered the pond and brought out his chopped hand and rushed to a nearby police station.

‘’Oh! I was nearly lynched if not for the courage and gallantry of two out of the three policemen who risked their lives to rescue me from the mob and took me to their station. You can see the sign of the serious beating I received from the mob. I am from Delta state, Isoko and my brother is married to an Igbo woman. The Igbo woman is from Ebonyi state. I have not even seen the face of the small boy. They told me he is within the age range of 11, 12 , 13 years. My wife had gone to see them for a peaceful resolution of the matter but she was not given attention. If God sets me free from this problem I will relocate to my village. I will never do fish pond again till I die.

‘’As I speak, I am still wondering why such an incident would happen because I am a very quiet and friendly person known by my neighbours. There is a retired military officer who is my neighbour. You can go and ask him about me. He will tell you that I am not a bad person. He himself, will be surprised how I got myself involved in this case and I am suspecting people in my village must have hands in this thing that happened and the way it happened. I know that some of my people in the village hate me and are very envious of me.’’

Confirming the incident, the spokesman of Lagos State Police Command, Mr Bala Elkana, a Deputy Superintendent of Police(DSP), said: ‘’On the 7th June, 2019, at about 12;20pm, one Doris Isaac of No. 6 Ajanaku street, Okoko, reported at Okoko Police Station that on the same day at about 8;30am, her foster son, Goodluck Amechi, of the same address, an 11- year- old boy was attacked with a machete by one Jeremiah Obrifor.’’

Elkana said the 61- year- old man Obrifor who resides at No.14 Isha Ibrahim street, Mechanic Bus stop, Mebanu, Okoko, allegedly cut off the boy’s right hand and it fell off.

He added that the victim was rushed to Igando General Hospital for medical attention.

Elkana said, the suspect alleged that he saw the victim around his fish pond and thought that he came to steal his fish, that was why he brought out the cutlass and attacked him.

Meanwhile, Obrifor has been arraigned before an Ebute Meta Chief Magistrates’ Court, Lagos, for allegedly chopping off the right hand of a 11-year-old boy.

Obrifor was slammed with a four-count charge of attempted murder, causing grievous harm and unlawful assault.

He pleaded not guilty.