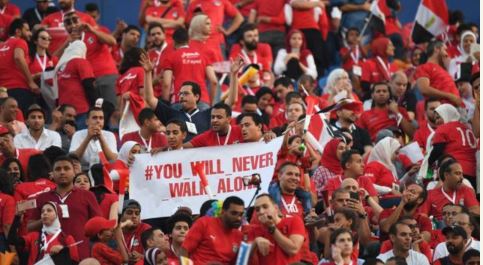 Several hours after the Bafana Bafana of South Africa ended the Pharaohs’ campaign in the on-going 2019 Afcon with a 1-0 defeat on Saturday, many Egyptians stayed rooted to their seats not believing what had happened to their darling team.

Thirteen years ago when Egypt hosted the African Cup of Nations, the Pharaohs displayed a brilliant performance by winning the trophy, beating the Elephants of Cote d’Ivoire in the final.

Many Egyptians were looking forward to a repeat of the 2006 outing this time, but their campaign went up in flames in the round of 16 on Saturday, a few hours after the Super Eagles of Nigeria sent the defending champions, Indomitable Lions of Cameroon packing from the competition with a 3-2 defeat in Alexandria.

Though the encounter between the Pharaohs and Bafana Bafana took place in the capital, Cairo, the impact of the defeat was felt around the country. Like the typical Brazilian football fans, many Egyptians stayed away from other things, including sales and driving whenever the Pharaohs are on the field of play. The result was shocking. The entire country was like a graveyard.

And from Cairo to Alexandria, Zamalek, Port Said and to other major cities in Egypt, the fans wore long faces, mourning the defeat to South Africa.

Now, the people want the Super Eagles of Nigeria to avenge the defeat for their country by beating the Bafana Bafana in their quarterfinal tie on Wednesday.

Those who spoke with The Guardian in Alexandria said they would pay their way to Cairo to support the Super Eagles in the encounter with South Africa.