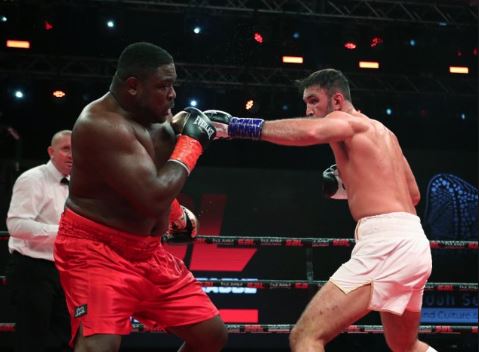 Hughie Fury earned the stoppage win in round seven against Samuel Peter in a foul-filled affair to make it back to back wins since his clash with Kubrav Pulev last October.

The fight came to an end after Peter suffered an apparent shoulder injury, and Fury was frustrated that it wasn’t a more clinical finish.

Fury said, “I was very disappointed with how it ended. There were a lot of blows in there but that’s how it is. I think frustration came in and when he was getting hit he was landing with the low blows.

“He just wanted to get out of there, it wasn’t a genuine injury, he just bottled it. I took his best shots but it is what it is.”

It was a bizarre display of boxing from the former WBC world heavyweight champion. Peter had hammered in two low blows to Fury, cousin to Love Island star Tommy, before referee Ingo Barrabas rushed in to separate the fighters.

After catching one of Peter’s punches to the nose, Barrabas pushed him to the ropes, from where the 38-year-old ‘Nigerian Nightmare’ claimed his shoulder popped out.

After a three-minute delay with doctor’s called to the apron, it was eventually waved off, leaving fight fans very critical over the frustrating affair.

38-year-old Peter hasn’t held a title for over a decade since losing his green belt to Vitali Klitschko in October 2008 and has lost half of his last 10 fights.

Hughie Fury continues his trail back to world title contention.