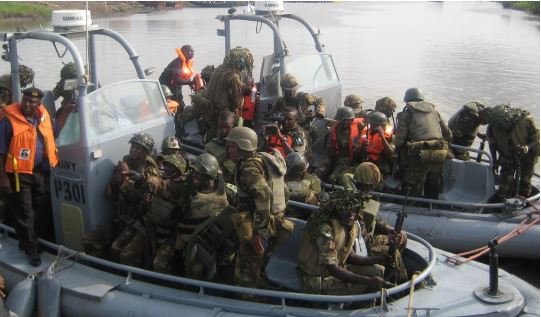 The Nigerian Navy on Friday arrested nine suspected illegal petroleum dealers during their operation on the Igbokoda coastal-line in the Ilaje Local Government Area of Ondo state.

The News Agency of Nigeria (NAN) reports that the suspects were arrested with 92 drums of illegally-refined and adulterated Petroleum Motor Spirit (PMS), which were presented as exhibits.

He said that criminal activities on waterways in the country, particularly in Ondo state, would no longer succeed as his men were battle-ready and had taken up the fight against such criminality with utmost priority.

According to him, the mandate of the Nigeria Navy, as enshrined in the law, is to make sure that the nation’s maritime domain is free of illegalities such as illegal oil bunkering, piracy and sea robbery.

“I warn criminal elements to stay clear of the coastal area and at the same time, law abiding citizens of the area should join hands in riddling it of acts of criminality,” he said.

While handing over the suspects to the Nigeria Security and Civil Defence Corps (NSCDC) for onward prosecution, he urged governments at all levels to provide jobs for the youth to stem criminal activities.

In his response, Asst. Commander, Diko Ibrahim, the Area Commander, NSCDC, Okitipupa Command, commended the Navy for its unwavering efforts at ensuring that criminal activities were reduced.

He affirmed that the synergy between the two security agencies in curbing criminality on the waterways would yield more fruits in no distance time.

He also assured the Nigeria Navy that the suspects would be prosecuted, in accordance with the law.

Meanwhile, some of the suspects, who confessed to the crime, disclosed that it was their first involvement in the illegal business but it was as a result of the high rate of unemployment in the country.