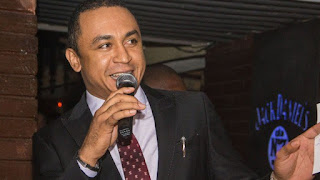 Popular and controversial OAP Daddy Freeze has expressed his thoughts on Nigerians who pray for their enemies to die.

In a post he shared on social media, the OAP classified praying for one’s enemies to die as suicide.

According to him, we as Nigerians are our own enemies, therefore rendering such prayer is an attempt at suicide.

Calling on SARS to arrest people who say such prayers, Sharing a post on social media, he said;

Quote
“In Nigeria, praying for enemies to die should be classified as suicide, we are, by a wide margin, our own enemies.

“SARS needs to start arresting people praying for their enemies to die by fire and begin charging them for attempted suicide.”