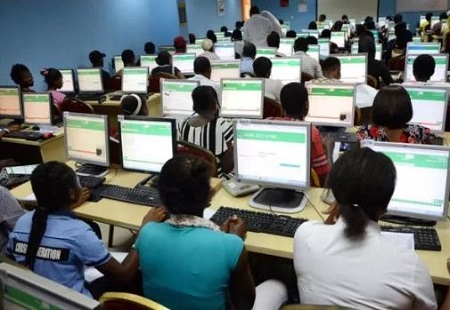 The Joint Admissions and Matriculation Board has handed over a 19-year-old female candidate, Rejoice Mordi, to the police in Abuja, for allegedly falsifying her 2019 Unified Tertiary Matriculation Examination score from 164 to 264.

The candidate confessed to JAMB officials that she got the fake UTME result from an agent, identified only as Iyanuoluwa via Whatsapp.

Our correspondent learnt that Mordi was arrested at JAMB headquarters, Bwari, Abuja, on Tuesday, when she went in company with her father to lodge a complaint that JAMB gave her two result slips.

Officials of the board said on Sunday that the candidate, who hails from Delta State, alleged that she met the agent who collected her registration number and those of three other candidates.

The board confirmed that it had handed over the candidate to the police for further investigations and prosecution.

Speaking about the incident in its bulletin on Sunday, JAMB said, “The 19-year-old who falsified her 2019 UTME result from 164 to 264 had petitioned us for (allegedly) giving her two results in the 2019 UTME. The board, upon receipt of the complaint, invited the candidate who appeared before the board in company of her father, Frank Emordi.

“The Registrar, Prof Is-haq Oloyede, read the riot act to the petitioner and her father and gave them a grace period to retrace their steps, knowing that there is forensic analysis that she falsified the score.

“Upon the expiration of the opportunity, after thorough examination of the evidence, the candidate owned up to her misdeeds. She said the agent sent the inflated result to her through a Whatsapp group which she had deleted.

“Checks by the board revealed that the candidate had made three successful attempts at checking her result. However, on the candidate’s dashboard, 164 score still remained. She had since been handed over to security agents for further interrogation.”

The candidate’s father appealed to the registrar, saying, “I talked to her (Rejoice) and she said a guy she met at the centre collected her registration number and three of her friends.

“The man was the one who forwarded the results to them through Whatsapp. If she had informed me about that, I would not have followed her to the JAMB office.”