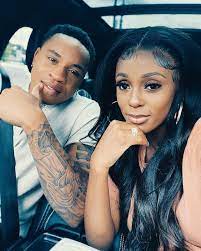 Rotimi announced the news on his Instagram on Monday, where he shared a video of him and Vanessa at their gender reveal party, to disclose the sex of their baby.

In the video, Rotimi released the umbrella, which rained in pink confetti on the couples, while he captioned the post “Baby #2!!! It’s a girl.”

The couple welcomed their first son, Seven Adeoluwa, in September 2021.