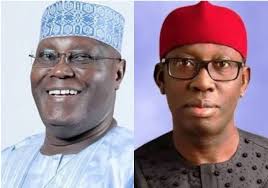 Spokesperson for the Atiku-Okowa People’s Democratic Party Presidential Campaign Organisation, Kola Ologbondiyan, hinged his confidence on the widely held belief that the President Muhammadu Buhari-led APC administration, has failed to deliver in virtually all measurable indices of performance in governance.

The former PDP National Publicity Secretary told Vanguard in a telephone interview, in Abuja, on Thursday, that the APC administration exchanged promises made to Nigerians with excuses when it took office.

He said, “We believe that Nigerians have since realised that they made a huge mistake by voting for the APC in 2015.

“They now know that the party of aggrieved persons who relied on baseless propaganda to deceive Nigerians into voting them into office, have nothing other than excuses to offer as soon as they took over.

“A majority of Nigerians would prefer a return to the pre-2015 era when the PDP offered purposeful leadership with the economy enjoying steady growth, the exchange rate of the Naira to the Dollar was within a tolerable range.

“An era when the average Public servant could afford to buy a bag of rice from his salary.

“What do we have today? The exchange rate of the Naira to the US Dollar is so unpredictable that it can exchange for N750 to one $1 in the morning and N800 to $1 a few hours later.

“What about security? People can no longer move between Abuja and Kaduna freely because bandits and kidnappers have taken over  the roads.

“Terrorists moved in and out of Kuje Prison unchallenged yet those in charge of security are still playing the blame game with nobody being made to take responsibility. We’ve never had it so bad as a nation.

“Nigerians are eager to give their mandate to former Vice President Atiku Abubakar, Governor Ifeanyi Okowa and the PDP, to rescue Nigeria from the hands of APC a party that is better off in opposition because members lack the requisite skill sets to provide true leadership.”