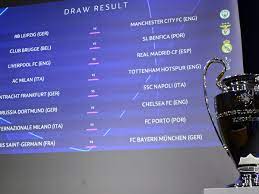 Real Madrid will face Liverpool for the fourth time in six seasons in the champions League last 16 .

Fourteen-time winners Real Madrid beat Liverpool 1—0 in last year’s final in Paris thanks to a goal from Vinicius Junior in the 59th minute.

It is the fourth time in six seasons that six-time winners Liverpool have taken on Real Madrid in the Champions League.