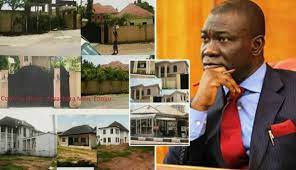 The EFCC has now released photos of some of the 40 properties that Justice Inyang Ekwo of the Federal High Court, Abuja, ordered Ekweremadu, a former Deputy Senate president, to forfeit to the Federal government.

A statement released by EFCC says among the affected properties forfeited include a London property at Flat 4, Varsity Court, Hormer Street ( WIH4NW) which was acquired on December 4, 2008 for £830,000; three properties in Florida, United States, one of which was purchased for $155,000 USD; a property on approximately 3000 square meter parcel of land consisting of 7 bedroom detached Boys Quarters, swimming pool, enclosed 3 car garage with roller shutter doors, gate house and generator house at No.6 Ilado Close, Ikoyi, Lagos bought for N630million on August 8, 2015; three blocks of six flats each, totaling 18 luxury flats at Plot 904 Durumi, Abuja acquired for N700million and Four Rootown House at Villa No. 148 Maeeni the Lahes Emirate Hill Dubai valued at $250,00 USD.

See more photos of the properties below…