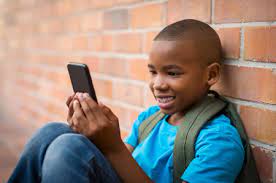 What’s the right age to get a smartphone ?

It is a very modern dilemma. Should you hand your child a smartphone, or keep them away from the devices as long as possible? As a parent, you’d be forgiven for thinking of a smartphone as a sort of Pandora’s box with the ability to unleash all the world’s evils on your child’s wholesome life.

The bewildering array of headlines relating to the possible impact of children’s phone and social media use are enough to make anyone want to opt out. Apparently, even celebrities are not immune to this modern parenting problem: Madonna has said that she regretted giving her older children phones at age 12  and wouldn’t do it again.

On the other hand, you probably have a phone yourself that you consider an essential tool for daily life – from emails and online shopping, to video calls and family photo albums. And if your child’s classmates and friends are all getting phones, won’t they miss out without one?There are still many unanswered questions on the long-term effects of smartphones and social media on children and teenagers, but existing research provides some evidence on their main risks and benefits.

In particular, while there is no overarching evidence showing that owning a phone or using social media is harmful to children’s wellbeing in general, that may not tell the full story. Most research so far focuses on adolescents rather than younger age groups – and emerging evidence shows there may be specific developmental phases where children are more at risk from negative effects.

Parents have a powerful influence as role models. children often mirror their parents smartphone use, For many parents, buying a child a phone is a practical decision. “In a lot of cases, parents are the ones that want the younger children to have phones so that they can keep in touch throughout the day, they can coordinate pickups,”

It can also be seen as a milestone on the road to adulthood. “I think for children it gives them a sense of independence and responsibility “This is definitely something that parents should consider: are their children at a stage where they are responsible enough to have their own device

Experts say communication and openness is key when it comes to how parents deal with young people smartphone use, including talking about what they’re seeing and experiencing online.

Whatever be the case, parents need to monitor child usage with strict rules and regulations in place, otherwise, ‘jail time’ for the device.

Smartphone usage at a young age has its positives, equally damning, are the negatives.