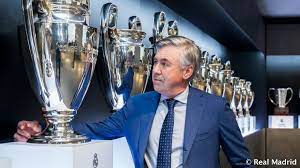 The legendary Italian coach has been wanting to bolster his attack since returning to the Bernabeu last year and became frustrated after failing to land Kylian Mbappe this summer.

Karim Benzema’s current injury woes have only amplified the issue that Madrid need to bring in attacking reinforcements.

And according to Spanish media outfit, Sport, Ancelotti has set his sights on Leao and Osimhen as priority buys in January.

Osimhen has been impressive in front of goal for Napoli this season, scoring nine goals in 13 games in all competitions.

His impressive scoring form has helped send Napoli to the top of Serie A, where they are on a 14-game unbeaten streak.

Leao has become one of Europe’s hottest properties at AC Milan and is wanted by Europe’s biggest clubs, with Chelsea and Manchester City ready to battle it out for the Portuguese star.

He was named Serie A MVP for 2021-22 and has scored six goals and nine assists in just 17 appearances so in both the Serie A and Champions League.

Despite inconsistency in his fitness this term, Benzema has still managed six goals and an assist in 11 games.

However, his stop-start campaign so far has made it difficult for him to replicate the form he managed last season which helped Madrid win LaLiga and Champions League.