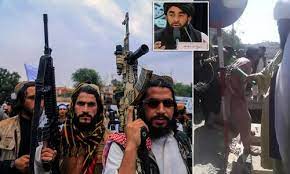 Afghanistan’s supreme leader has ordered judges to fully enforce aspects of Islamic law that include public executions, stonings and floggings, and the amputation of limbs for thieves.

Taliban chief spokesman, Zabihullah Mujahid made the announcement late on Sunday, that the ‘obligatory’ command by Hibatullah Akhundzada came after the secretive leader met with a group of judges.

The Taliban promised a softer version of the harsh rule that characterised their first stint in power, from 1996-2001 but have gradually clamped down on rights and freedoms.

‘Those files in which all the sharia (Islamic law) conditions of hudud and qisas have been fulfilled, you are obliged to implement.

‘This is the ruling of sharia, and my command, which is obligatory.’