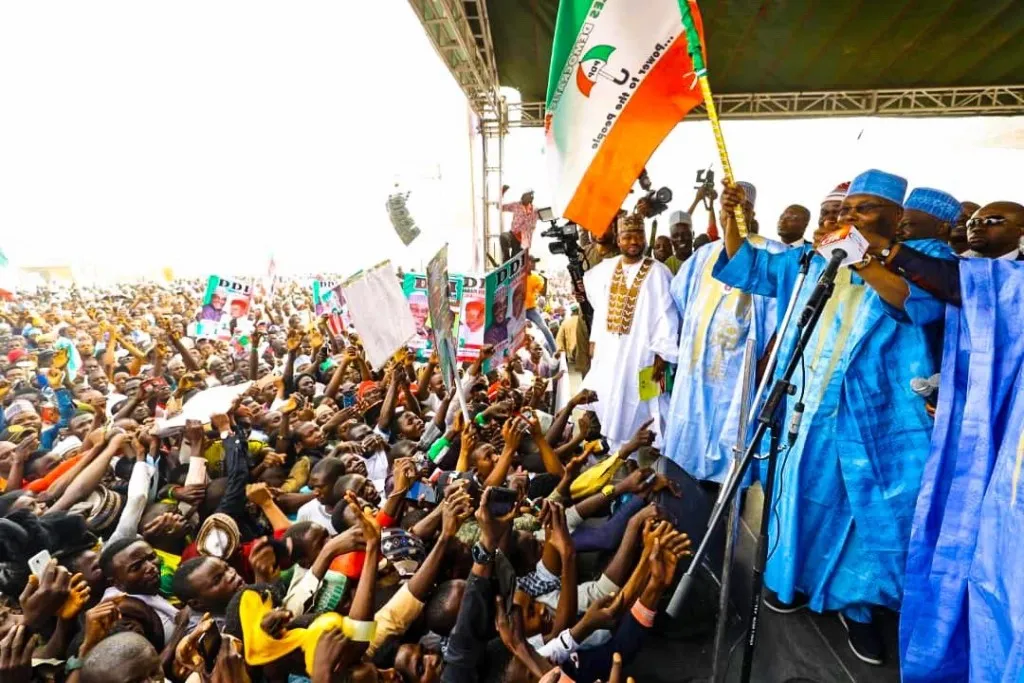 The presidential candidate of the Peoples Democratic Party,PDP. Atiku Abubakar has promised to wipe out Boko Haram and help businessmen revive and expand their business in order jump start the economy if elected President come 2023.

Atiku made the promise while addressing a crowd of party supporters at the PDP Presidential Campaign in Gombe, Gombe State, on Monday.

He also promised to assist in putting in place policies to jumpstart businesses and help businessmen expand their business in order to revive the economy which is currently in a terrible state.

Atiku who spoke mostly in Hausa said, “What I want to pledge here in Gombe is to ensure that we give businesses the support to set-up industries that will give youths both males and females jobs.

“Recall it was the PDP that built the Dakin-Kowa Dam to provide electricity to the North-east and give farmers the opportunity to farm, I will create wealth and jobs in Gombe State, if you give me the mandate.

“I promise you that if you elect me what we have started, I will ensure that the electricity that will be provided from Dakin-Kowa Dam will be sufficient to the entire North-east.

“ I will enhance farming so that our farmers will have the opportunity to farm both during raining and dry seasons.”

On his other plans for the North East Geo-Political Zone, Atiku said, “Gombe, Bauchi, Adamawa, Borno and Yobe are all interconnected; therefore, I will ensure that we build roads to enable smooth trip within these states with ease and ensure that commercial activities thrive, most especially.

“I will return peace to the state because without peace all these pledges that I made cannot be actualized, I will wipe out Boko Haram. Book Haram is nothing.

“PDP is coming back to bring the economy back, to make sure there is light, to make sure no more darkness, to make you have access to many things you are not having now.“

Also the Director General of the PDP Campaign Council Tambuwual said, “We know that the Wazirin Adamawa is here at home in Gombe and when the PDP gets to power in 2023 Atiku will ensure security, peace in Gombe and Nigeria at large.

“We know that Gombe is a commercial center, we shall ensure that wealth is revitalised and bring development, commerce in Gombe and the country at large.

“Youths both male and female will get jobs in the country, farming will be revitalised and the country as a whole. I know the people of Gombe know this, which is the agenda of his government if elected.“

National Chairman of the PDP, Sen. Iyiochia Ayu, while addressing the crowd, appealed to the people of the state to vote for the party in all elections because it was the only political party which has the capacity to transform Nigeria. He noted that the party had done it before and was prepared to do it again.